This past week has been incredible. I was lucky enough to be accompanied by a magnificent human being in one of the best cities on Earth, J, the man that I met in Rotterdam. The first day was spent wandering around our Airbnb in Issy-les-Moulineaux, eating, and just enjoying each other’s company again.

One thing we noticed, that was much too amusing for me, was all of the French people walking around with baguettes. I feel like when Americans go to do a French accent a lot of us, for some reason, say “French baguettes.” I have recently talked to a few other people that have visited Paris and they also confirmed that Parisians, do in fact, seemingly carry bread around all the time.

The last night in Issy-les-Moulineaux we went to an amazing little bar that was above a laundromat and the way to get in was through one of the washing machines and up a small dark staircase. The cocktails and service were way above what I was expecting. In the past I’ve been kind of let down by hip and hyped bars but this one I could see becoming a regular place if I lived here. There was no way I was having my flash go off inside of the bar. You can check out photos here. After great drinks and nearly falling off one of the swings in the bar, we strolled around and got food from a hole-in-the-wall sandwich joint. We walked around in circles for too long because we missed the last metro that went to the flat we were staying at. Being lost at night with no data to look up how to get back or even call a taxi is always fun. We found a bus stop and got on going in the right direction, then almost got on one going in the wrong direction, then back on one that was going to our flat. We finally are feeling better and the we realize we forgot the keys and locked them in the house. It was around 2AM and this was probably the worst thing that could happen right now. Even with all that, it felt like nothing was going wrong at all. I was on the high of happiness so I had no complaints. Any time spent with him was good time; even sleeping on the hallway floor and freezing. It’s funny how some people see a bad night and take it just as that. Some days that turn out rather shitty are the ones that stay in our minds the longest and can become the best memories. We need to learn not to beat ourselves up over messing up a little bit like missing a few ways home, forgetting the keys, and getting lost. Enjoy it. As long as no one is in any immediate danger, life at the moment is still good.

The catacombs were creepily fascinating. We initially were planning on going through a different entrance. The catacombs are large underground tunnels holding more than six million people’s bones. The development of underground giant tomb started in 1774 due to the overcrowding of cemeteries in Paris. Walls were collapsing and surface area were running out. The renovations that turned the piles of bones into and organized display started in 1810. Walls of the catacombs are now lined with the attractively macabre works of art.

Disneyland! My inner child was going crazy in my mind for a while. I am so happy that I decided to get a couple nights at Disney’s Newport Bay Club Hotel. Granted, it wasn’t a financially responsible purchase but sometimes you need to treat yourself. It was beautiful; The rooms, the lobby, the pool, the restaurants, everything. What made it even better was finding out that I had already paid for two breakfasts and reserved a lakeside room. I guess that was a birthday surprise to myself because I booked the hotel while -slightly- intoxicated a few months ago. If I had the money, we probably would’ve stayed here a week. The first night there was spent relaxing in the sauna, swimming a bit, and eating pizza. It couldn’t have been better.

I was expecting Disneyland Paris to be smaller than Disney World Orlando, of course. In hindsight, we probably could have done the bigger rides in both parks in one day but it was nice not having to rush, especially while it was raining and cold.

The evening of my birthday was spent in the pool until it closed and instead of having a birthday cake, we had birthday eclairs and beer. Overcome by emotions on such a seemingly average night, I was filled with painfully aching happiness. I felt it all over, even in my finger tips. Felicitous melancholy. 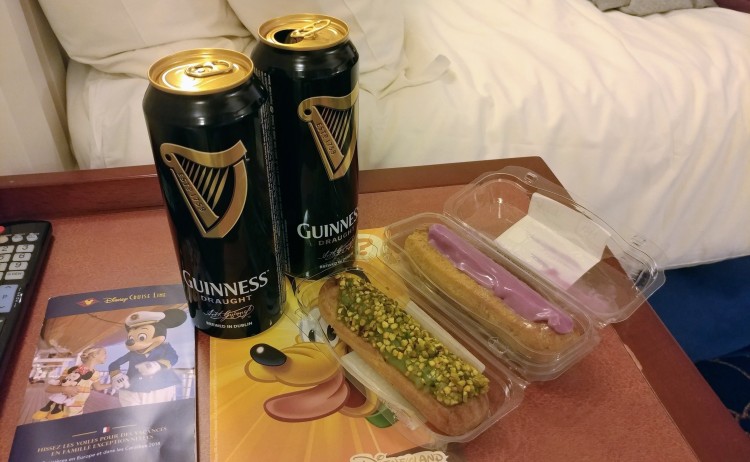 J stayed with me for an extra night in Paris which, of course, made me beyond happy. I used to scoff at people for saying the over-used phrase: “It’s not where you are, it’s who you’re with.” Now, I definitely owe those people an apology. Being frozen and having to sleep in a hallway alone could have easily been one of the worst memories of the year. It was one of the best since I was with a person that I love being with.

The following couple of days I was in a foggy haze. I was still trying to make sense of the past week and where to go from here. It felt as if someone had put my brain in a blender. I couldn’t shake the mutterseelenallein feeling even though I was surrounded by so many people.

The Wandering Sloth would like to welcome our newest author, The Stray Kat. Be on the lookout for her content! :D