About last night… If every day could be that perfect then I think my life would be set forever.

Now for this morning… I would like to start with saying that I am fully aware of how stupid I am and that I need to plan things better.

01:00 rolls around and I look to see exactly what time I need to be at Rotterdam Centraal to get on the train to Eindhoven. Well, the trains only run that early in the morning on weekends. I am now stuck. Yes, I wanted to stay but not like this. I had a plane to catch. I go through everything, trying to figure out my options. Maybe book a later flight later in the day? Way too expensive. Get on the very first train? I will be way too late. Uber. It would cost €170. This was apparently the only option. I schedule pick up for 03:30 and hope this works out.

I book a hostel for a few nights in Warsaw and go over the plan for when I get there in my head. I fell asleep for a bit which made me even more tired. Sitting on the couch talking and trying to say goodbye. I told myself not to cry until I got in the car so he doesn’t think I’m a complete nutcase. I go downstairs and the driver is supposedly around the corner somewhere. Some time went by and we couldn’t find the dude. The ride is cancelled and I put in for another one. He showed up and I was trying so hard not to lose my composure. J and the driver say something I don’t understand in Dutch and J goes upstairs. I’m not really sure why the driver is just sitting there. I guess he could tell I was confused a bit and told me that J is coming to the airport with me. How could someone be so damn sweet? He comes downstairs and slides in next to me. Trying not to cry is even harder now because I mentally prepared for this and now I can’t relax and let myself tear up.

I know leaving someone isn’t a huge deal and that I’ll be fine tomorrow. Like I said before, for some reason, I’m abnormally emotional recently. The car ride was much too short. We got to the airport and I didn’t want to let go. As soon as I did and turned to walk inside my chest caved in and my eyes filled with tears. It’s the possibility of never seeing him again and being forgotten that hurts the most. I know I barely know him but sometimes we fit nicely with others and we want it to be like that for as long as possible. I’ll be okay. I’m always okay.

The flight was awful. I had to sit in a middle seat and couldn’t fall asleep. Luckily, it was a short flight. I sat in the airport for too long eating, drawing, and people watching. I got a bus ticket to Warsaw Centrum and had to wait another hour and a half. I got another latte and continued my people watching. After a long while and a relaxing quiet ride, I made it to the city center and walked to Chmielna 5 Hostel. It’s a nice place and the hallway and stairwell remind me of an old haunted hotel. 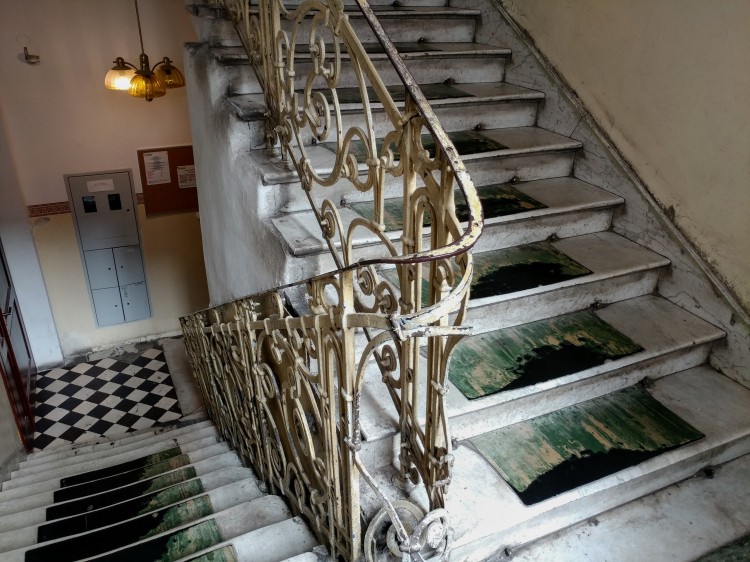 I fell asleep and now I’m too tired to go out. I’ll be relaxing for a while and then I’m going back to sleep. The Polish adventure will start tomorrow.

The Wandering Sloth would like to welcome our newest author, The Stray Kat. Be on the lookout for her content! :D